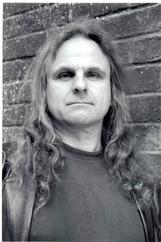 Michael Natkanski grew up in Colchester, Essex, and began in the 70s as a drummer in the glam rock band 'The Mighty Plod'.  He served the usual hired hand and covers band apprenticeship, including chart pop, soul, country, cabaret, indie rock and backed Elvis impersonators on Clacton pier and the soul singer Lucas.  In ’75 he got signed twice, firstly with ‘The Mighty Plod’  to indie label Banjul, then later to EMI under legendary 60s writer/producers Ken Howerd and Alan Blaikley as a member of the boy band 'Fiver'.

In 2003 The Mighty Plod belatedly surfaced on Cherry Red's acclaimed ‘Velvet Tinmine - Junk Shop Glam' compilation.  He was also the character ‘Stix’ in Martin Newell's autobiography ‘This Little Ziggy’ which the London Evening Standard referred to as a ‘Spinal Tap of the A12’.

In the 80s he took a few years out as a mature student to do a Psychology degree at the University of Plymouth.  After that he qualified as a software engineer and designed computer systems for city firms and major charities.  Throughout all this he kept his chops up in covers bands and doing songwriter demos.  He also played drums on a few tracks on the recently released Martin Newell/Cleaners From Venus boxed set and is the drummer on the 2017 re-issue of 'Barricades and Angels' by the Stray Trolleys.

Keen to pursue his dreams of songwriting and composing, in 1991 he began studying piano and music theory at Morley College, where one of his teachers was Lisa Westerhout.   Along the way he also did the Certificate in Copyright law at City University London and set up his own studio to teach himself audio engineering and production.

At Morley he studied composition with Phil Wachsmann and later won a scholarship to do a classical music degree at Royal Holloway University of London which he finished in 2008. Specialising in orchestration and composition, his tutors included Tansy Davies, Mark Bowden and Philip Cashian. His finalist dissertation is the only harmonic analysis of Ringo Starr's drumming in the known universe.  As well as songwriting and producing with Lisa Westerhout as 'Gone To Lunch' he also composes his own orchestral and chamber music.